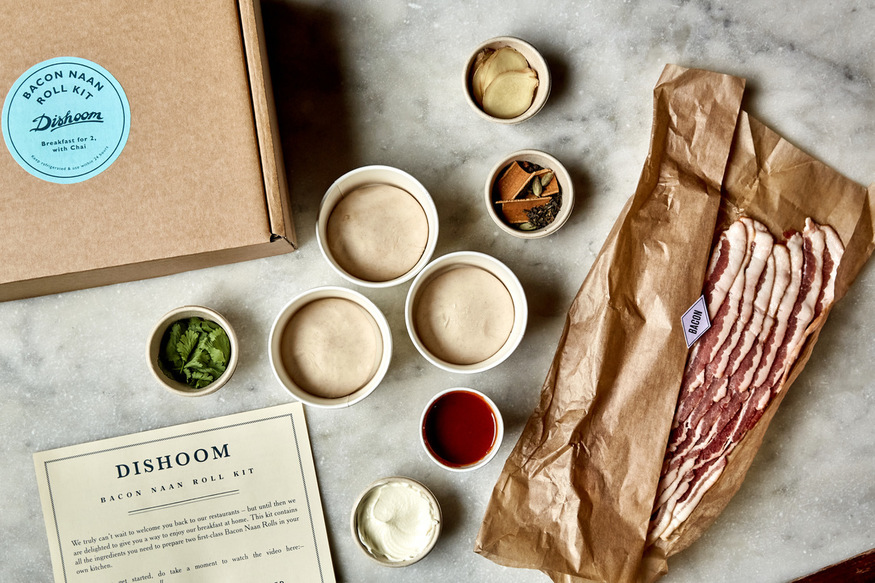 Dishoom’s first foray into the lockdown world of DIY delivery kits is a banger.

Although the modern Indian’s also dispatching its wider menu if you’re in Deliveroo radius of their King’s Cross, Shoreditch or Kensington restaurants, the bacon naan roll brunch kit — probably their most famous dish; definitely the one we’ve been missing the most — is available for delivery nationwide now.

Each kit comes with bacon smoked over applewood and beechwood, cream cheese, coriander, the signature tomato-chilli Dishoom ketchup, and three doughballs — one for ‘experimentation’: so you can afford to mess up your first naan.

But it’s fairly hard to mess up the naan: all three of our slapdash attempts turn out light, billowy and nailing that chewy, slightly elastic texture. Fast — and apparently idiotproof — to turn from doughball to perfect naan, and weirdly satisfying to watch them puff and swell under a grill.

Rather than being a forlorn replacement for the restaurant experience, there are real benefits to having the Bacon Naan Roll at home. Not queuing, being the big one. Dishoom at brunch usually involves a wait, and — at a casual 15 minutes from unpacking to plating up — you could make and eat this delivery kit many times over in the length of time we’ve sometimes stood plaintively outside their Shoreditch branch, clutching a chai for warmth.

Bonus features: it also comes with a DIY masala chai kit, a donation to kids’ food charity Magic Breakfast for each kit bought, and video instructions for any nervous first-time naaners. Turns out one of London’s most sought-after restaurant brunches is also one of lockdown’s easiest and most satisfying DIY delivery boxes.

For every bacon naan kit sold, Dishoom are donating a meal to Magic Breakfast. Delivery is £6 — or if you’re local to their King’s Cross, Shoreditch or Kensington restaurants, you can order via Deliveroo.

The London Mayoral Election Has Been Postponed Until 2021

Things To Do Today In London: Wednesday 26 February 2020