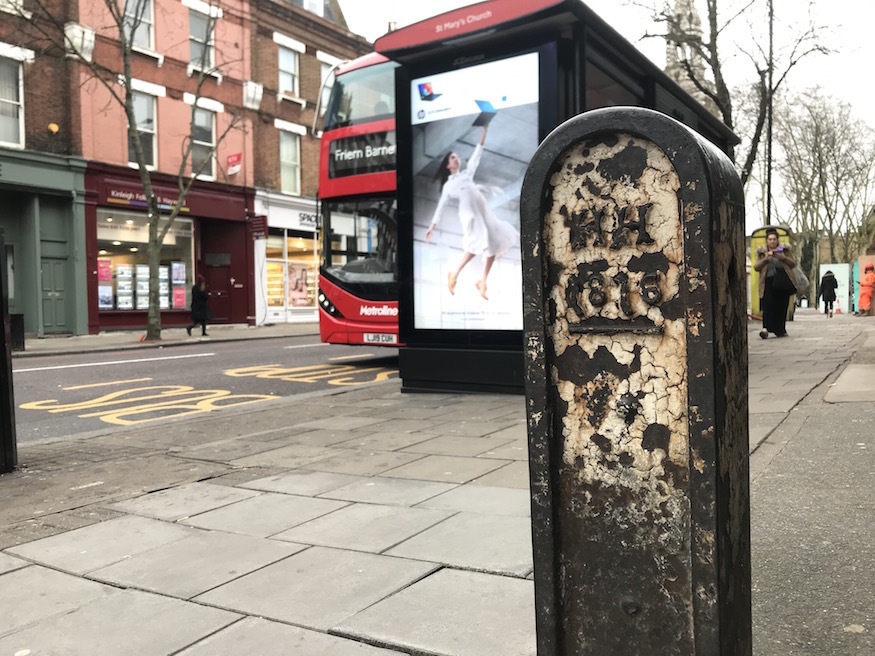 About half way along Upper Street stands one of London’s most mysterious bollards.

The metal post bears only the inscription ‘HH 1816’. Very little information can be found about the post online. What is it? How did it get there? And how has it survived?

My attention was drawn to the bollard by reader Joseph Kaz. It stands outside 133 Upper Street, close to St Mary’s Church.

That date of 1816 is particularly intriguing. Metal posts or bollards of this era are rare. The earliest are usually said to be made from enemy cannon, captured in the Napoleonic wars. This is clearly not the case here. 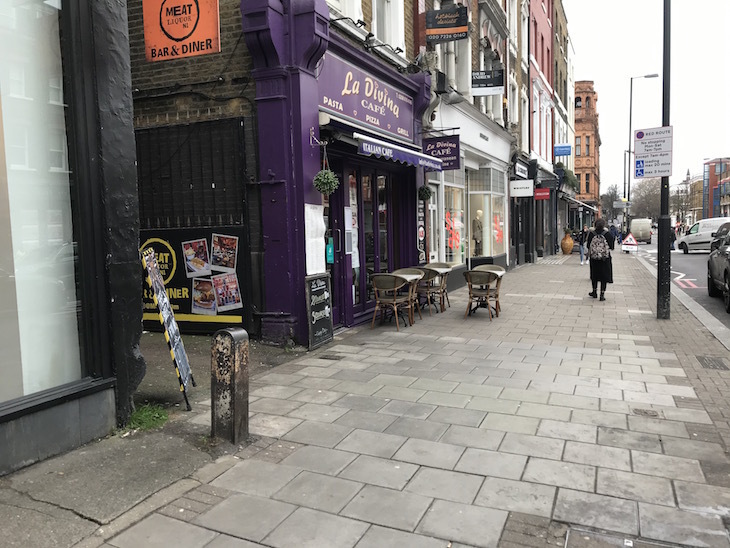 Metal plaques still exist from earlier times to mark parish boundaries, but few come on posts and, besides, the letters HH do not match up to any local parish names. What could this be?

Granted, the world has more pressing mysteries, but who can resist a bit of bollard intrigue?

My first thought on seeing ‘HH’ was “Hicks Hall”. I’ve written extensively about definitions of the “centre of London“, and Hicks Hall plays a part in that story.

The hall stood at the southern end of St John Street from 1612 to 1782 and served as a court house for the County of Middlesex. Though long gone, the building’s ghost still lingers. You can sense its former presence at the point where the road widens significantly. This bit, here, now bequeathed to bicycle and motorbike parking: 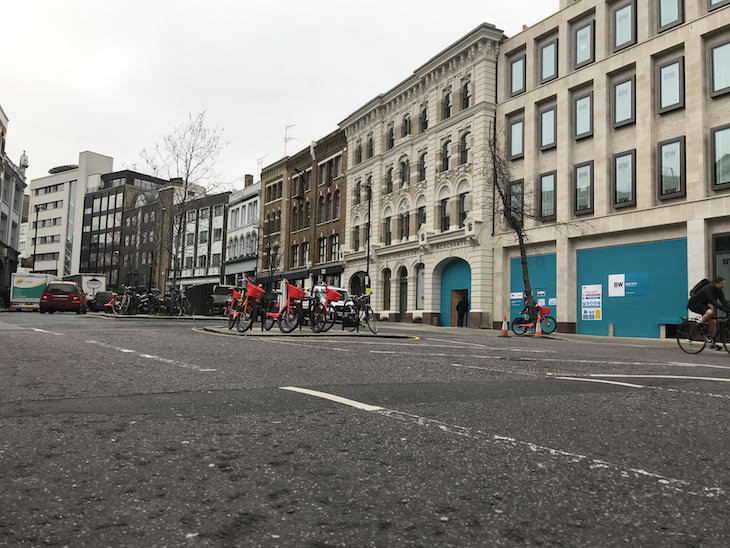 Site of Hicks Hall, where the road still widens to allow bike parking.

For years, Hicks Hall was used as the measuring point for distances on the Great North Road (basically, the A1). Mileposts referencing the hall were placed along the route. Could our mystery bollard, with its HH initials, be a relic of this forgotten system?

Possibly. It’s in the right place, about a mile from the site of Hicks Hall. And although the hall had been demolished by 1816, the name lived on and was commonly applied to the successor sessions house, which still stands in Clerkenwell Green. It seems the perfect fit.

The evidence against is strong, though. If the post were a milestone, then we’d expect to find the legend ‘1 mile’ somewhere on the post. It’s badly weathered but, as far as I can tell (and I gave this bollard a loving stroke to make sure), no other embossed lettering was ever present. It’s also on the wrong side of the carriageway for someone heading towards Hicks Hall — though it could, of course, have been moved.

Another explanation is to be found in one of the few online references. A 2008 edition of The Local Historian magazine (PDF download) refers to:

“[A post]… embossed HH 1816 and evidently a marker of a long-since vanished private estate… Presumably the 74-acre Highbury House estate, owned in 1816 by Robert Felton, but later built over.”

Now that’s also an intriguing notion. Is our metal fellow an old boundary marker from a vanished private estate? Similarly aged posts can still be found in other parts of town serving this purpose, like the metallic echoes of the Foundling Estate or Hans Town. It’s quite possible. However, Highbury House was itself about a mile from the site, farther north beyond Highbury & Islington roundabout. If it is from that estate, then it has migrated some distance.

The article refers to, and pictures, another marker in Clissold Park, Stoke Newington of similar design. This one carries a much later date of 1876 and serves as a parish boundary marker. Perhaps they come from the same foundry batch and our 1816 bollard is actually from 1876, with the 7 deteriorated to look like a 1. I don’t think so, though. The two posts use different lettering styles, suggesting they were not cast in the same batch.

We should also look at the immediate surroundings of the bollard. Like most street furniture on Upper Street, it stands outside a trendy eatery. The building is, however, quite an old one, and a Grade-II-listed former school. According to Historic England, this dates from the early 19th century, which conforms with the year on the bollard (1816). 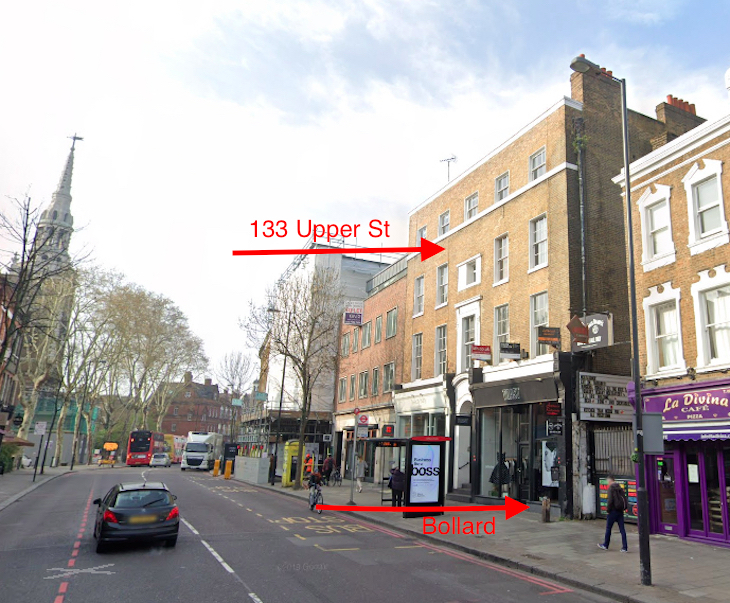 The information in the listing citation is somewhat lacking. An online heritage statement gives a little further information, revealing that the building started out as an 18th century private house, with additions to turn it into a music school in the 19th century. Sadly, it makes no reference to the HH post, nor offers the name of the school. We’ve hit another dead end.

Can you solve the mystery?

We still have no answer. I now favour the estate marker explanation, perhaps for Highbury House, but more evidence is needed. If anybody reading this has further information, or even wild speculation, then please leave a comment below or email matt@londonist.com.

With thanks to Joseph Kaz, and the members of the London Historians and Londonist Memory Machine Facebook groups.

The World's Poshest Drop-Down Menu Is Back!

Things To Do Today In London: Thursday 13 February 2020

7 Essex Seaside Towns (And Islands) To Visit From London

Essex has a decent-sized coastline running all the way from the Thames Estuary up to the shipping port of Harwich,